By Sean R. Douglas, former Government
Press Secretary of the Government of Dominica.

For months I agonised as to whether I should remain silent ollowing my departure as Press Secretary exactly one year ago.  The long period I spent in Martinique recently was a time of deep personal reflection. I now feel a moral obligation to set the record straight for this and future generations. It would be a gross dereliction
of duty to my country and a betrayal of the memory of my mentor, Rosie Douglas, for me to maintain my silence while our country, Dominica, slides further towards dictatorship and the legacy of my uncle is desecrated with impunity.

I must now free my conscience and explain to the world for the first time the set of circumstances which culminated in my ‘dismissal’ as Government Press Secretary after nine years of dedicated service. The public also needs to understand that our institutions have become ineffective under this regime and how Roosevelt Skerrit has created a personality cult as the supreme leader and Prime Minister. He has also cultivated in Dominica a culture of nepotism and has demonstrated a flagrant disregard for the values of honesty and integrity in the governance of our country.

My refusal to be an apologist for the actions of unscrupulous politicians was the underlying reason for my ‘sacking’. Even as I tried to focus the public mind on the good work of the government in many areas, I just could not, in conscience, defend the many blatant contradictions and lies.  The government wanted a party political propagandist to defend corruption rather than a press secretary to disseminate information on government policies.

But how could I defend corruption in government!  In the 2000 general election campaign, the Dominica Labour party accused the United Workers party government of being corrupt. And with the support of Eugenia Charles, Labour and Freedom, joined forces and succeeded in throwing out the ‘corrupt’ UWP from power.

In his inaugural address as Prime Minister, on February 7th 2000, Rosie Douglas said: “We must evolve a political culture that is intolerant to corruption….. Poor governance and corruption are major constraints in the pursuit of economic development…. It interferes with the revenue collection capacity of the state and, illegally and immorally, it diverts resources from the general welfare of the people into private hands- into the hands of friends, relations and colleagues.” In 2003, under the leadership of Pierre Charles, the Integrity in Public Office Act was passed. In
2004, the government ratified the Inter-American Convention against corruption. While it has signalled its commitment to international norms regarding corruption, the Roosevelt Skerrit government in practice has violated the very
principles of the convention.

A major contradiction in the actions of the Skerrit administration was the decision to bring Julius Timothy into the government.  Julius Timothy was the man held responsible for the economic crisis that forced the Pierre Charles government to embark on a stabilisation programme in 2002.  Timothy was the architect of the RBTT and Citibank bond issues that added an extra $11 million dollars annually to our country’s debt service obligations. Under the
arrangement millions of dollars in taxes and dividends from Cable and Wireless and DOMLEC went straight to Trinidad to service the bonds, depriving the state of much needed revenue.

As Finance minister, Timothy was responsible for Dominica being blacklisted by the OECD Financial Action Task Force and it was the United Workers party’s conduct in government that forced the Canadians to impose visa restrictions on Dominicans in 2000.

Labourites will well remember when Timothy and the UWP reneged on an electoral accommodation with the Labour party in the 1990 elections. That betrayal by Timothy hurt so bad that the Labour party decided then the enemy was not Freedom but the UWP. Today Julius Timothy sits comfortably in cabinet with Roosevelt Skerrit, Ambrose George and Reginald
Austrie.

It is farcical that a Labour party that was swept into power in 2000 on a moral crusade to slay corruption in government is today itself mired in sleaze. It is an irony that the attorney Rosie gave the responsibility to conduct an inquiry into allegations of corruption by the UWP government is today defending corruption on behalf of this administration.

This regime must stop the grotesque pretence that it is the standard bearer of the ideals of Rosie Douglas.  On February 7th 2000, Rosie had this to say on campaign financing: “ It appears that we need robust control over election spending to ensure that political parties are properly accountable to the people of Dominica, to prevent conflict of interest and the exercise of improper influence. We need to ensure that politics in this country does not become a matter of who can spend the most. This is wrong. This is very wrong!”  It is clear that eleven years after Rosie made that profound statement the present regime has discarded yet another tenet of
Rosie’s beliefs.

To point to wrongdoing by this administration is not to deny its achievements. I am proud to have been part of the Pierre Charles administration that restored sanity to the public finances in 2002-2004.  It was a watershed when Swinburne Lestrade declared in 2005: “The economic decline has been reversed, the fiscal legacy has been defeated and the economy is now on an upward growth trajectory.”

There have been significant gains in education and infrastructural development. Roosevelt Skerrit will always be associated with the Windsor Park stadium. His idea to have one university graduate in every household by 2015 is a noble one. But in the midst of all these positive developments, unscrupulously, clandestinely and corruptly, this administration has been enriching itself at the expense of Dominica’s overwhelmingly poor majority.

There have been reports of immense meddling by this administration in the bidding processes for public sector
contracts. The garbage bin scandal, the fertiliser transaction and Roosevelt Skerrit’s alleged ownership of the villas have left an indelible stain on the reputation of this regime.

This administration’s association with Rudolph King, Roman Lakschin and David Hsui, the mystery regarding the billion dollar raffle and the involvement of government spokespersons in the continuing soap opera surrounding the firebombing of Glenworth Emanuel’s home –  all point to a regime in moral decay.

Citizens for a better Dominica should never have been established by labour party activists in 2005 to serve as clandestine mechanism for the receipt of campaign finance. Non- profit organisations are established to serve the public good and not be partisan entities. The Labour party has never satisfactorily responded to claims that the sum of US$400,000 that was channelled through that organisation was payment for a diplomatic passport
issued to Susan Oldie.

Mystery still surrounds discussions with Chinese investors to bring close to 10,000 Chinese to Dominica using land at Cotton Hill and Cabrits. Many have doubts about the authenticity of the MOU between Dominica and China, made public by Dominica government in 2005.

Over the years Roosevelt Skerrit has very skilfully built a personality cult, playing on the themes, ‘Skerrit cares’ and ‘Thank God for Skerrit’. Instead of cabinet government, we have prime ministerial government.

This personality cult has been built on Roosevelt Skerrit’s wide discretionary powers as Minister for Finance and his influence through the Housing Revolution Programme, Public Support Programme and the Small Business Unit. Ministers of Government, advisors, ambassadors and cronies are all pawns in the maintenance of this personality cult. Many party supporters are beneficiaries of government’s outsourcing, having been granted contracts to supply security and janitorial services to government.

His personality cult status is further entrenched by his appointment of ‘certain people’ to the top brass of the Police Force, the upper echelons of the Public Service and on statutory boards and public corporations.  DBS news is now effectively the radio version of the Government Information Service. Even some of our religious leaders are now captive to the Skerrit personality cult.

The criticism on radio by a Senior Counsel and a minister of government of then magistrate, Tiyani Behanzin while the
intimidation case of Renneth Alexis was still in progress, is another manifestation of a country sliding towards dictatorship. The belief that the Police are taking instructions from a government attorney is worrying. One wonders therefore whether this government has the moral authority to reverse the rising tide in violent crime in Dominica.

In the last 18 months we have seen our country slide further towards dictatorship and the emergence of the Skerrit personality cult.  And to think that days before nomination day for the 2000 general elections, Rosie Douglas was not sure whether Roosevelt Skerrit would be a candidate for the D.L.P!  This administration is so tainted it is
difficult to imagine how they can govern effectively until 2014. Today rapacious greed, nepotism and political victimization have taken hold.  Rosie’s vision of forging closer ties with the French and developing a special affinity with African/Americans has been forgotten. Political observers say I got out just in time.  This administration’s unconscionable conduct in government is a despicable defilement of Rosie’s memory. 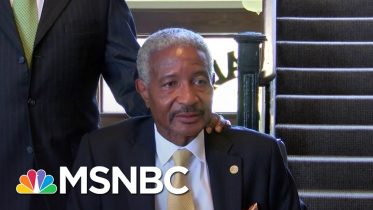 ‘Time For Waiting Is Over’: Mississippi Mayor Orders Removal Of Confederate Flag | MSNBC

Mayor Johnny Magee of Laurel, Miss. signed an executive order to take down the Confederate flag flying in his city, saying "time for waiting…