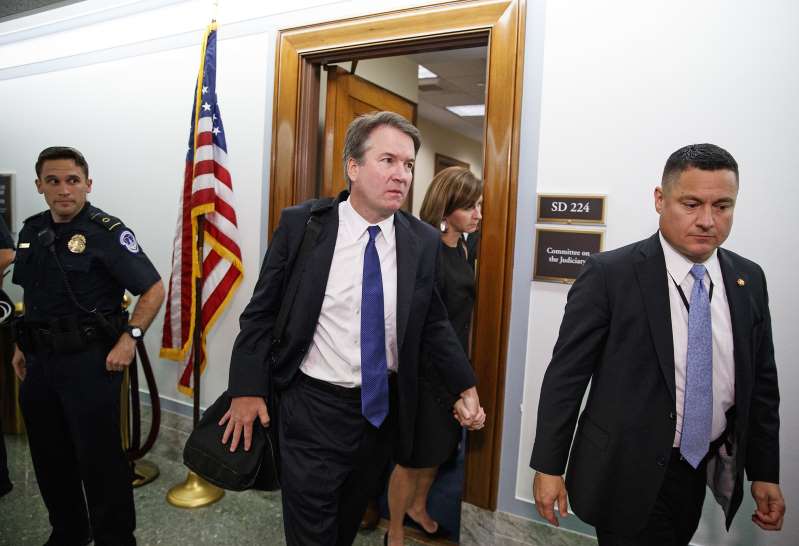 WASHINGTON — In the days leading up to a public allegation that Supreme Court nominee Brett Kavanaugh exposed himself to a college classmate, the judge and his team were communicating behind the scenes with friends to refute the claim, according to text messages obtained by NBC News.

Kerry Berchem, who was at Yale with both Kavanaugh and his accuser, Deborah Ramirez, has tried to get those messages to the FBI for its newly reopened investigation into the matter but says she has yet to be contacted by the bureau.

The texts between Berchem and Karen Yarasavage, both friends of Kavanaugh, suggest that the nominee was personally talking with former classmates about Ramirez’s story in advance of the New Yorker article that made her allegation public.

In one message, Yarasavage said Kavanaugh asked her to go on the record in his defense. Two other notes show communication between Kavanaugh’s team and former classmates in advance of the story.

The texts also demonstrate that Kavanaugh and Ramirez were more socially connected than previously understood and that Ramirez was uncomfortable around Kavanaugh when they saw each other at a wedding ten years after they graduated. Berchem’s efforts also show that some potential witnesses have been unable to get relevant information to the FBI.

On Monday, a senior U.S. official confirmed that the White House had authorized the FBI to expand its initially limited investigation by interviewing anyone it deems necessary as long as the review is finished by the end of the week. The New York Times first reported the change in scope.

News reached out to Berchem for comment after obtaining a copy of a memo she wrote about the text messages. In a statement to NBC News, Berchem, a partner in the law firm Akin Gump, said: “I understand that President Trump and the U.S. Senate have ordered an FBI investigation into certain allegations of sexual misconduct by the nominee Brett Kavanaugh.

I have no direct or indirect knowledge about any of the allegations against him. However, I receive text messages from a mutual friend of both Debbie and mine that raise questions related to the allegations. I have not drawn any conclusions as to what the texts may mean or may not mean, but I do believe they merit investigation by the FBI and the Senate. “

On Sunday, Berchem emailed FBI agent J.C. McDonough her memo. After getting no response, she resents the summary on Monday morning along with screenshots of certain texts that she thinks raise questions that should be investigated. “I’m sure he’s really busy and expect that he’ll get back to me,” said Berchem.

Berchem’s memo outlining her correspondence with Yarasavage shows there’s a circle of Kavanaugh friends who may have pertinent information and evidence relevant to the inquiry who may not be interviewed. Senate Majority Leader Mitch McConnell has already set in motion a vote on Kavanaugh’s nomination on the Senate floor for later this week.

Kavanaugh has strongly denied the allegation by Ramirez as well as accusations by Christine Blasey Ford that he sexually assaulted her when the two were in high school and by Julie Swetnick that Kavanaugh engaged in sexual misconduct at parties while he was a student at Georgetown Preparatory School in the 1980s.

Berchem, 51, a graduate of Yale and a Connecticut resident, reached out to Sen. Richard Blumenthal’s office last week. Blumenthal, a Democrat, sits on the Judiciary Committee.

“We heard from Kerry late on Thursday and submitted her summary to the Judiciary Committee early Friday,” a spokeswoman for Blumenthal said in a statement to NBC News. “After we were made to jump through several hoops that delayed our moving forward, it became clear that the majority Committee staff had not turned this summary over to the FBI and, in fact, had no intention of turning it over to the FBI. With our assistance, Kerry submitted her summary to the FBI herself.”

George Hartmann, a spokesman for Senate Judiciary Committee Chairman Charles Grassley, R-Iowa, said that “the texts from Ms. Berchem do not appear relevant or contradictory to Judge Kavanaugh’s testimony.”

“This appears to be another last-ditch effort to derail the nomination with baseless innuendo by Democrats who have already decided to vote no,” Hartmann said.

Berchem’s texts with Yarasavage shed light on Kavanaugh’s personal contact with friends, including that he obtained a copy of a photograph of a small group of friends from Yale at a 1997 wedding in order to show himself smiling alongside Ramirez 10 years after they graduated. Kavanaugh was a groomsman and Ramirez a bridesmaid at the wedding.

Berchem hired a lawyer on Sunday to help her get her information into the right hands. She has twice sent her memo to the FBI and has yet to hear a response, according to her lawyer, who spoke on condition of anonymity. He flagged two texts in particular 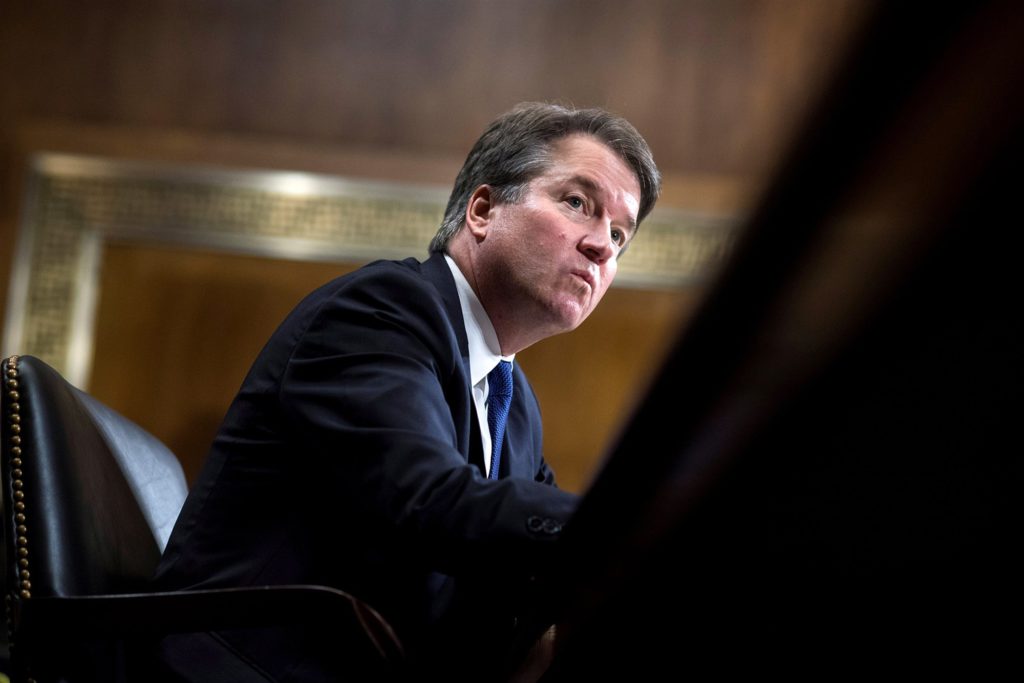 In a series of texts prior to the publication of the New Yorker story, Yarasavage wrote that she had been in contact with “Brett’s guy,” and also with “Brett,” who wanted her to go on the record to refute Ramirez. According to Berchem, Yarasavage also told her friend that she turned over a copy of the wedding party photo to Kavanaugh, writing in a text message: “I had to send it to Brett’s team too.”

Bob Bauer, former White House counsel for President Barack Obama, said “It would be surprising, and it would certainly be highly imprudent if at any point Judge Kavanaugh directly contacted an individual believed to have information about allegations like this.

A nominee would normally have been counseled to leave to his legal and nominations team the job of following up on any questions arising from press reports or otherwise, and doing so appropriately.”

Further, the texts show Kavanaugh may need to be questioned about how far back he anticipated Ramirez would air allegations against him. Berchem says, in her memo, that Kavanaugh “and/or” his friends “may have initiated an anticipatory narrative” as early as July to “conceal or discredit” Ramirez.

told the Senate Judiciary Committee under oath that the first time he heard of his former Yale classmate Deborah Ramirez’s allegation that he exposed himself to her in college was in a Sept. 23 article in The New Yorker.

Kavanaugh was asked by Sen. Orrin Hatch, R-Utah, when he first heard of Ramirez’s allegations. Kavanaugh answered: “In the New Yorker story.”

Supreme Court nominee on defense to clear his name

“I didn’t say I would have known … I said she never told me, I never heard a word of this ever happening and never saw it. The media surmised (that I was saying she is lying),” said Yarasavage.

Yarasavage declined to speak to NBC News as did other classmates named in Berchem’s memo who may have information pertinent to the investigation.

Finally, Berchem is concerned about what she witnessed at the 1997 wedding where Ramirez and Kavanaugh were both in the wedding party.

The wedding took place 10 years after Ramirez and Kavanaugh graduated. According to the information Berchem provided, Ramirez tried to avoid Kavanaugh at that wedding of their two friends, Yarasavage and Kevin Genda.

Ramirez, “clung to me” at the wedding, Berchem wrote to Yarasavage in a Sept. 24th text message recalling the event. “She never went near them,” a reference to Kavanaugh and his friends. Even in the group photo, Berchem wrote, Ramirez was trying to keep away from Kavanaugh.