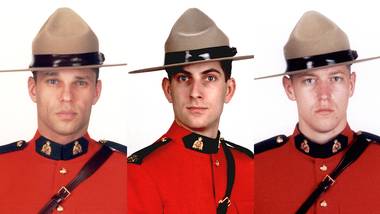 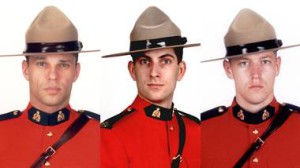 From diving to retrieve bodies to performing CPR on a young child, the three slain Mounties had served their communities in a broad range of ways in the last decade.

The three victims of Wednesday’s shooting were described as “incredible members” at an emotional press conference in Moncton Friday morning. “I can’t dig deep enough to explain the sadness that we all feel. We need to start this healing process together,” said RCMP Assistant Commissioner Roger Brown.

The three were members of the Codiac regional detachment, which covers the area around Moncton, Dieppe and Riverview.

The son of a physician, Constable Gévaudan was born in Boulogne-Billancourt, near Paris. A motorcycle mechanic who got fed up with his native country’s economic situation, he immigrated to Canada in 1991.

“He arrived with just his suitcase,” recalled a French friend who also settled in Montreal with him. “We had had enough of France. We were without family ties, we were on an adventure.”

After trying various ventures, he was working at the Garda security firm, when the friend saw ad for the RCMP and suggested that they sign up.

Following his graduation from the training academy in February 2008, Constable Gévaudan was posted to New Brunswick where he was a general-duty officer.

He was also a member of the RCMP dive unit and sometimes had the gruesome task of recovering drowned people.

“He loved his job. He was part of the diving unit, not just road patrols but also rescue operations, searches, recovering bodies,” the friend recalled.

On one occasion in the fall 2012, they were returning home and an exhausted Mr. Hepworth asked the officer to take over the driving.

Between Charlo and Bathurst, Constable Gévaudan had to swerve twice to avoid hitting two moose. “That was great,” he told Mr. Hepworth, who replied, “We just cheated death, you know.”

Constable Gévaudan was married and had an eight-year stepdaughter. He had recently returned on duty after being on sick leave because of a head wound suffered while on duty.

Constable Gévaudan kept his sense of humour around the people he worked with in the community.

Corey Ferguson, a residential group home youth worker, kept in regular contact with the officer a year and a half ago when one of the youths kept running away.

“I was pretty stressed,” Ms. Ferguson says, but Constable Gévaudan was understanding, personal and funny.

“He teased me often,” she says. He would make Ms. Ferguson guess how to spell out his name every time she needed to put it on a report, so she’d remember it – “which worked,”

Originally from Victoriaville, Que., Constable Ross had been posted in New Brunswick since 2007. A K-9 squad dog handler, he is the father of a young boy and his wife is expecting another child. After being posted to Moncton, he married a local nurse, Rachael Vander Ploeg.

Shortly after arriving in Moncton, Constable Ross started attending Hillside Baptist Church regularly, which is located about two kilometres from where the gunman lived.

It was at the Hillside church that the officer met his future wife, Ms. Vander Ploeg, said another churchgoer, Charles Doucet.

Four years ago the couple was married at the church.

“He said he considered himself very lucky to have married such a great woman,” Mr. Doucet recalled.

Constable Ross was not a loquacious man but he was friendly and humble, he said.

Jerry Reddy, Hillside Baptist Church’s Senior Pastor, met Constable Ross shortly after he arrived in Moncton and described him as a man of great integrity who has been a vital part of the church’s community.

“It wasn’t a job, it was really a calling and he just had a passion about being a Mountie,” said Mr. Reddy “For him it was an opportunity … he felt that he had been blessed and wanted to be a blessing to others by serving our community in that way and we just all are indebted to him. He paid the ultimate sacrifice.”

Constable Ross’s modest home sits just 100 metres from the wooded area where police arrested Mr. Bourque early Friday. Neighbours said he would always exchange gifts with them at Christmas, such as wine or cookies. He was rarely seen without his police dog at his side.

“There are just no words to describe how broken up we are about this,” said one neighbour. “He was not only a police officer but a very good friend.”

Other neighbours simply teared up at the mention of his name.

Constable Ross’s mother, Hélène Rousseau, told reporters Friday that she last spoke to her son two days ago through FaceTime. She said her son loved his country and died doing what he loved.

“I have good memories because before leaving him, two days before his death, and every time he would hang up, it was always ‘never forget how much I love you,’ ” she said in French while fighting back tears. “He’s my hero and I’m really proud of him.”

A New Brunswick native, Constable Larche is from Saint John and graduated from training depot in 2002. He worked in his native province, in Miramichi, Doaktown and most recently at Codiac detachment, where he was assigned to highway patrol and general duty.

In his 12 years in service, Constable Larche did everything from trying to limit the number of drunk drivers during the holiday season to witnessing a man on trial throw a copy of the Criminal Code at a judge.

He once saved the life of an unconscious baby in Moncton, for which he received a Commander’s Commendation in 2008.

There were also tragedies. Three years earlier, he was the first officer at the scene of an accident in Doaktown when a three-year-old girl was pinned under a car. Despite performing CPR on her, she died of her injuries.

In a quirkier incident, he was testifying in court in a case for possession of stolen property when the defendant threw the Criminal Code at a judge, according to an article from The Moncton Times and Transcript.

With reports from Patrick White and Josh O’Kane in Moncton

N.B. focused on ‘new normal’ in wake of COVID-19 outbreak

Be the first to comment on "Moncton’s fallen Mounties: Three lives of public service lost" 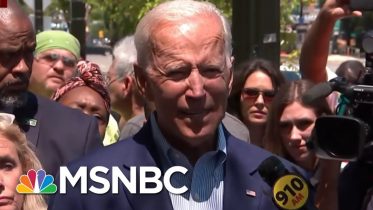 Former VP Joe Biden admits his surprise over the way some 2020 Democratic challengers went after the Obama legacy during the debate. The president…

‘No One Will Critique’ The U.S. If We Over-Prepare, Says Doctor | Morning Joe | MSNBC