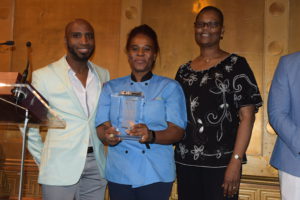 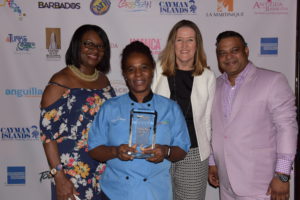 With a robust schedule that included one-on-one media interviews, MOU signing with Airbnb and participating in the Rum & Rhythm event, Caribbean Week 2017 was a success for Pure Grenada, the Spice of the Caribbean

(St. George’s, Grenada) 14th June 2017— Caribbean Week in New York, hosted by the Caribbean Tourism Organization (CTO), proved to be a successful endeavor for the promotion of Grenada’s tourism product. Grenada’s delegation was led by Minister of Tourism and Civil Aviation, the Hon. Dr. Clarice Modeste-Curwen; Chief Executive Officer of the Grenada Tourism Authority, Ms. Patricia Maher and Director of Sales and Marketing (USA), Mrs. Christine Noel-Hosford. The destination’s participation in the week-long schedule of events which ran from June 5 to 9 was supported by the island’s North American public relations agency Cheryl Andrews Marketing Communications, under the leadership of President, Cheryl Andrews and Director of Client Development, Jennifer Johnson.

The Grenadian delegation spent the first half of the week attending trade-focused events including: the Travel Agent Trade Show & Educational Forum, a targeted event that provided a platform to showcase the destination’s offerings and interact with Caribbean-selling agents based in New York, New Jersey and Connecticut on June 6; Caribbean Marketing Conference, an interactive seminar dedicated to enhancing marketing initiatives on June 7 and Caribbean Tourism Industry Awards Luncheon, an occasion where the CTO recognizes journalists and photographers who have published captivating and influential stories spotlighting the region on June 8.

Also on June 8, in a private conference held during Caribbean Week, Hon. Dr. Clarice Modeste-Curwen, on behalf of the Government of Grenada, signed a memorandum of understanding (MOU), to formalize and implement a cohesive partnership with the global home-sharing company, Airbnb. The signing of the MOU is part of ongoing efforts by the GTA to maximize exposure of the destination and will act as a streamlined framework for the collaboration between the GTA and Airbnb.

Next on the agenda was Media Marketplace, where the Grenada booth was a favorite for the more than 100 media in attendance, all eager to hear and learn about the latest news, developments and industry offerings from the island. This event provided yet another valuable opportunity to be top-of-mind with niche and general destination writers across all platforms including print, digital, online and social media. Additional one-on-one media appointments included a Facebook Live video interview with Travel Agent Central Magazine on June 6, and sit-down meetings with Recommend and Travel Pulse magazines on June 9.

The week wrapped up with a festive evening of dining and dancing at CTO’s Rum and Rhythm Benefit and Auction, held at the historic, Capitale in New York. Grenada’s table was one of the most popular as the team, led by Yvette Michelle LaCrette who won the two coveted prizes of the evening–People’s Choice Award and Celebrity Chef of the Year–served up curried goat, mashed breadfruit and callaloo with Coucou dessert.

“Caribbean Week continues to be an important platform for us to showcase Pure Grenada and the destination’s unique tourism product,” noted CEO Maher. “In addition to strengthening ties with our regional and international tourism counterparts through the CTO business meetings and educational events, our participation in the industry seminars and Media Marketplace provided us with the opportunity to place Grenada front of mind with key trade and consumer journalists in our largest market, and to share what new travelers and returning visitors can expect for the summer and upcoming winter season.”