Roseau, Dominica: August 16, 2017 —– Patrons of Dominica’s World Creole Music Festival can now purchase their festival tickets online.  Discover Dominica Authority has partnered with TicketPal Caribbean to provide ticketing services for the 20th edition of the festival.    Headquartered in Barbados, TicketPal Caribbean offers all-in-one ticketing solutions to event organizers across the Caribbean and in parts of the United States and Canada.  Through this partnership, Dominica’s World Creole Music Festival is visible to TicketPal’s network of over 650,000 subscribers who can now purchase their festival tickets with one click.

In 2017, we are focused on creating an unforgettable patron experience and visitors and locals can look forward to not only an exciting lineup but a transformation of the Windsor Park Sports Stadium to the Festival City in a manner like never before.  So buy your tickets early and get ready for the undisputed premiere musical experience in the Caribbean. 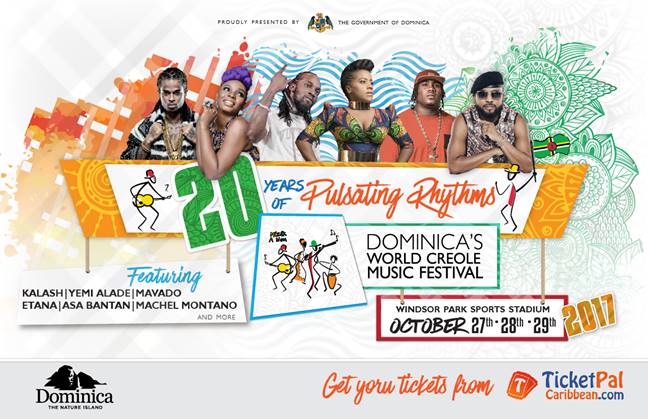