Sen. Cory Booker asked Supreme Court Nominee Amy Coney Barrett whether she believed every president should make a commitment to ‘the peaceful transfer of power.’ Barrett refused to answer, saying “Well, senator, that seems to me to be pulling me in a little bit into this question of whether the president has said that he would not peacefully leave office and so to the extent that this is a political controversy right now as a judge I want to stay out of it." Aired on 10/13/2020.
» Subscribe to MSNBC: 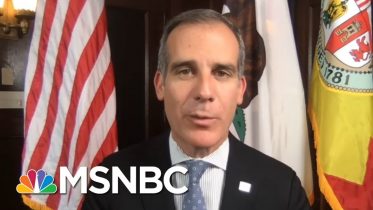 Los Angeles Mayor: ‘We Also Need To Be Prepared For This 6, 7 Months From Now’ | Deadline | MSNBC

LA Mayor Eric Garcetti says he expects California’s new statewide stay-at-home order to last for 2 months, as he assesses how to keep his…