So, our ‘capacity’ (head/mind) or ‘ability’ (body) to impact is further challenged. And this is precisely what makes life exciting because this ‘multiverse’ is willing to support and has been willing long ago … Let me tell you my story …

In and around November 20, 2008, I took to writing Fall’s weight upon my consciousness and surfaced one year later with a 171-page book titled ‘An Unassuming Love (Black Memory, A Traveloguer And Cricket).

Now I just wrote. Didn’t realize that I was hearing at a subtler level – transcending mere hearing to receive what I may well describe as ‘the sound of Earth’; ‘the sound of air’ ‘the sound of ancient spiritual wisdom’.

At the time I did not think so and, I may well be running much ado about nothing. I doubt.

Given what was captured in text form – given what was heard in heart, by mind and soul during that November morning three years ago, seems to me that we who are not known to impact universal and multiversal should begin or continue to write our ‘insignificances’.

I call them ‘insignificances’ since they represent our condition as humans in a select part of Earth’s geography who do not appear to have meaning in this refined ‘global environment’. Seems only the bellicose, rich and well-to-do ‘hear’.

Was a cold November morning in Stone Mountain, Georgia which gets colder than New York City and Boston. Coming in from that hardening ice, I entered my warm apartment to begin writing about a trace I had in the cold about “her teenage kiss, lodged in a spot like a light in my heart for use in times of unsun – a throbbing place.”

“But,” An Unassuming Love continued, “the cold was overwhelming across this vastness of states bordering states, neighbors united.”

I gather the might of cold erased thoughts of that moist tongue slipping! It could not erase courses of remembering, the path this thought took to finding me – as if I were separated from it by a blood’s drop and fire. I wrote, “memory’s neuro-network is intricately responsive in stringing its audio wares. From an inner distance, I heard a 1974 song rising to my head, warming me. It was its lyric, which mattered. I heard Garfield Blackman k.a Ras Shorti I — known as the Father of Soca –, singing the amazing – Om Shanti Om -.”

Now I’m in Georgia, USA. The last time I heard that song was years ago and in the Caribbean. What pushed this song to surfaces of my thoughts and, yes, I thought once that thoughts came only in words. And yes, when they travel with sound and word, do they come from the same place? Wow!

Let me tell you the rest of the story. Where I come from we say ‘rest

In place of ‘remainder’ though we can use both …

I wrote, “Aum/Om is the mystic syllable of Hinduism. Ras Shorti I is chanting in my heart and brain now ‘neighbours living like strangers with neighbours/no love sah/no love for one another’.

“ … Earth and its societies, its civilizations knew harsh weather out there, exposed to the elements and their fluctuations touching us today in grand and telling ways as our oceans warm and dry. We could, with the breath of Om, calm ourselves and produce exponentially a circle of fructifying justice, peace, sense of self-worth and profound hope to the hopeless and helpless.

“India’s and the world’s spiritual leaders inform us further that The mantra Om — said to be the sound of the universe – is a oneness tone for us Earth-travelers, eager to commune, communicate with hurricanes, earthquakes, volcanoes, tornados, snow icicles and hail.

“We here, hear not only that which surrounds us, but that revolving inside us — its coded tones vibrating now from a time past informing us that remembering is living and, its reach is beyond time” (An Unassuming Love (Black Memory, A Traveloguer And cricket)/Chapter 3. www.steinbergh.com).

This is what I wrote three years ago. Fast forward. It’s November 22, 2011 and three e-mails catch my attention.

Somebody is saying “thirty thousand people have tried this mind exercise, you should too!”

The Numerology community was said to be “RAVING about this meditation audio:

“Why? Because it shifts your brainwaves and gets you meditating

I’m not being self-indulgent here. That’s the same OM I heard three years ago rising in Stone Mountain, Georgia as I negotiated November’s morning falling temperatures and ice. That’s it? It was on sale!

They could sell it. It’s not mine. I just wondered whether I, an island child, heard its spread coming and further, whether Ras Shorti had deduced its sound from rings of a tree or from an East Indian elder woman in forests of Trinidad & Tobago.

Mails did not stop. There were two others, one from a group calling itself Finer Minds.

Finer Minds wrote, “ … OM Week Kicks Off Today.” That was the week of November 22.

They continued, “ … we have an inspiring slew lined up. This week, learn how to better manifest those inspiring visions, hear how Steven Spielberg first experienced the magic of film, discover the secrets to feeling rich no matter what your budget, and learn how strides in Integrative Medicine and meditation are changing the well being of humanity” http://www.omharmonics.com/video/meditation-challenge

They contend that “close to 376,000 people subscribe to the Finer Minds newsletter ….”

Steven Spielberg heard that sound somewhere along his way to becoming. That sound out of India they say, informs energy medicine and psychology, though suspect, I gather by a Christian establishment. That’s another matter …

. Wow! I heard this three years ago coming down to meet the market! And they were really selling.

They wrote “ … today must be your lucky day. Because you’re about to be one of the first people in the world…(And the universe for that matter…)

To experience the future of meditation.

We call it Omharmonics. You can call it your new best friend.

>>> Visit this page to get your free Omharmonics audio

When you’re ready just relax, press play, and listen. It’s as easy as breathing . You’ll be meditating like a Himalayan monk in minutes” http://www.omharmonics.com/audio

There’s a lesson to be learned in our island peoples simple observations. We need listen closer to ourselves, always believing we are as significant as any other in this universe and multiverse.

God gives us ideas too and, when we take time to count, we’ve produced the world’s prophets … We need make profits now from our insights, hearings, utterances and spiritual experiences.

Let’s continue to remind them – those of our historical encounter – that in this Third Millennium, the universe and multiverse are too vast to be plundered … they’re revealing their sounds to the world’s ‘insignificances’ and ‘nonpeoples’ with a quality in quantum rapidity!

(Copies of An Unassuming Love are available in Dominica at Jolly’s Pharmacy on King V St. and Joycelyn at Portsmouth. The book wil soon be at Choices on Hilsboro St., Roseau.

Be the first to comment on "… AN OM COINCIDENCE OR CONVERGENCE!" 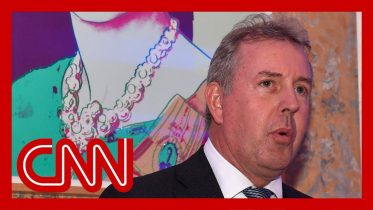 Kim Darroch, British ambassador to the US, resigns

Britain's Ambassador to the United States, Kim Darroch, has resigned after a series of leaked diplomatic cables revealed he told 10 Downing Street that…

Jeffrey Epstein Dies By Suicide In His Jail Cell | MSNBC

Mark Sanford: We Need To Talk About What Being GOP Means | Morning Joe | MSNBC