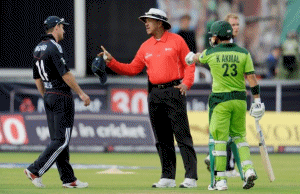 Hail! Congratulations are in order! Did you know that Monday 20 September 2010, was a special day for the Commonwealth of Dominica, the OECS and the Caribbean?

Yes, it was the celebration of International Cricket Elite Umpire, Billy Doctrove milestone in cricket. The outstanding Dominican national walked onto the field at the historic Lord’s ground to stand in his 100th One-Day International, making him just the second West Indian to reach this landmark. The 55-year-old sport adjudicator officiated in the fourth One day international (ODI) between England and Pakistan.

The humble Nature Island citizen said, “I feel really proud … and to walk out at Lord’s is putting the icing on the cake. To do my 100th ODI … I have to say I am honoured. I am very proud to reach this milestone and at the same time I am humbled. When I joined the Dominica Umpires’ Association in 1975 I never thought I would ever stand in 100 ODIs. I am sure my whole country is looking ahead to this occasion. I am happy to reach this milestone.”

The only other West Indian to stand in 100 ODIs is the legendary Jamaican Steve Bucknor – Doctrove’s mentor. Bucknor did 128 Test matches and 181 One-Day International before retiring in March 2009.

He attributed his achievements to his discipline and endurance. He noted, “I never thought I have would reach this milestone. But this shows that with perseverance, patience and high level performance, you can reach the very top of your profession. Umpiring has changed to certain extent since I started my career, especially with the technology accompanying cricket now. But pre-match preparations remain the same and you still have to do the basics right.

He remembers the special occasions. He highlighted: “I’ve enjoyed so many special moments in my career so far. There are quite a few standout moments but my first-class debut in 1991, my first Test match between the West Indies and Pakistan in 2000 in Antigua and my appointment to the Emirates Elite Panel of ICC Umpires in 2006 are definitely the most special. Also, when I did my first Boxing Day Test match in 2008 at my favourite ground, the Melbourne Cricket Ground, it was a great honour for me, as was the Test match at Eden Gardens in Kolkata between India and Pakistan in December 2007. On that occasion, there were 90,000 spectators and I told my mentor, Steve Bucknor, that this crowd was bigger than my entire country. It was an electrifying atmosphere.”

Who is Billy Doctrove? Before he became a cricket umpire, he was a soccer referee. During his time as a referee Doctrove took charge of several international matches, including a World Cup qualifier between Guyana and Grenada in 1996. Despite retiring from international refereeing in 1997 he is still a keen follower of world and English football, supporting Liverpool F.C. and being nicknamed Toshack, after the ex-Liverpool striker. He is also President of the Dominican Football Referees Association, and President of the Windward Islands Cricket Umpires Association.

After retiring from football refereeing in 1997 Doctrove was able to concentrate more on his career as a first-class umpire. In April 1998 the West Indies Cricket Board appointed Doctrove to his first One Day International (ODI), the match between West Indies and England at Kingstown, St. Vincent. In that match he stood alongside Steve Bucknor, which gave him the chance to work with one of the world’s finest ever umpires, and Doctrove learnt a great deal about the skills required to officiate an international match. Over the next few years Doctrove’s decision making continued to impress at first-class level, and whenever he got to stand in ODIs. He was rewarded when he was appointed to his first test match, the third test between West Indies and Pakistan at the Antigua Recreation Ground, St. John’s, Antigua, in May 2000.

In 2002 he became a member of the Emirates International Panel of ICC Umpires. He stood on that panel for four years during which time he stood in a large number of ODIs and the occasional test. The highlights of his time on the International Panel were an appointment to the 2004 Champions Trophy, and the U19 World Cup in Sri Lanka in early 2006, where he stood in the final. In April 2006 his consistent good performances were rewarded with his promotion to the Emirates ICC Elite Umpire Panel. Doctrove continued his strong performances on the Elite Panel and this was confirmed with his appointment to the final of the 2010 ICC World Twenty20 in the West Indies.

Doctrove, who is also a qualified FIFA referee, started umpiring at the first-class level in 1991 during the West Indies Cricket Board’s four-day competition in a match between Jamaica and the Windward Islands at Windsor Park in Dominica. He stood in his first ODI in 1998 at Arnos Vale in St Vincent when England toured the Caribbean. His first Test match came two years later at the ARG in Antigua when the West Indies played against Pakistan.

The ICC Umpires’ and Referees’ Manager Vince van der understands what such achievement means to the region and its people: “Billy is a strong, steadfast and dedicated umpire. Sport is his passion and his career. The people of Dominica are justly proud of their countryman as their first FIFA soccer referee and their first ICC elite umpire. This has been a wonderful year for Billy. In May this year, he umpired the first two ODIs ever to be played in Dominica, between the West Indies and South Africa.”

A local cricket fan penned the soci0-cultural impact thus: “That hot summer day in 2000, I was privileged to be an eye witness to the unfolding of history. I along with hundreds of Dominican fans crammed into the Recreation Ground stands cheered loudly as Umpire Doctrove walked to the middle to make history and to be literally tested in fire in what turned out to be a highly contentious match between two fierce rivals. Back home, thousands were clued to their television sets rooting for their local hero. Every decision made was closely watched and monitored. We held our collective breaths, watched the replays anxiously and breathed deep sighs of relief when he got it right. It was as if the whole cricketing future of Dominica was resting on his shoulders. This was indeed some unforgettable moments. For those of us who love the game of cricket, every umpiring decision can be questioned. Was the batsman really LBW or was the ball barely missing the off stumps. Was that really a deflection from the bat or ball
hitting pad, and on and on. I could only guess at the tremendous pressure under which Umpire Doctrove performed his duties having to concentrate ball after ball, over after over, in the blistering Caribbean heat. In the end, the West Indies won the match, and Umpire Doctrove walked off a true winner proving that his successful and patient rise to the top was well deserved.”

Well done Billy! Now, with night-landing facilities, many more international visitors will get access to Dominica – the Nature Island! {jcomments on}

Be the first to comment on "Hail the Man!" 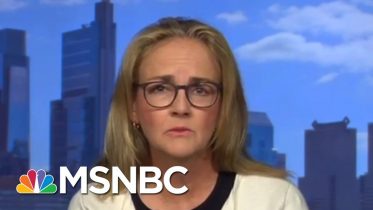 Rep. Madeleine Dean (D-Pa.) joins MTP Daily to discuss the Pentagon moving $3.6 billion in military funds toward building the border wall and what…