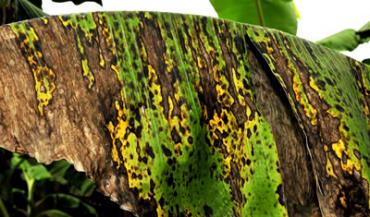 CASTRIES, St Lucia, Wednesday February 8, 2012 – Help may be on the horizon for St. Lucia’s banana industry after its status reached crisis proportions following an attack by the leaf spot disease, the Black Sigatoka.

Already trying to recover from an attack of the yellow sigatoka the country’s banana industry was already in trouble with plants damaged by the disease producing up to 50 per cent lower yield of fruit.

Agriculture minister Moses Jn Baptiste referred to the Black Sigatoka disease as a national crisis and warned that the country’s food security was under threat.

However, international agencies, including the French and Taiwanese Embassies based in St. Lucia, have all expressed an interest and desire to give a helping hand to remedy the situation.

A specialist from the International Centre for Agronomic Research and Development (CIRAD), which is a French research centre working with developing countries, has suggested that the country look at planting a banana species that would resist the Black Sigatoka.

Emmanuel Moiyez of the French Embassy explained that while the new plant was resistant, it was not clear how it would grow in St. Lucia. But, he added, there were other options that could be explored so the disease could be fought in the shortest possible time.

While co-operation between St. Lucia and CIRAD has been ongoing since 2007, the Taiwanese Embassy has also expressed a willingness to become involved.

Ambassador Tom Chou said: “This is a very serious disease. As far as I know, about 70 percent of the banana fields have been affected,” he said.

Options open to the government include applying chemicals to the leaves of banana trees. Chou explained the chemical was a kind of oil that would have to be applied to the plants every two weeks.

According to Chou, that option was a sustainable one to save the bananas. The alternative, he stated was to cut off the affected banana trees and start fresh with one plant taking up to 10 months before.

Chou recommended to the St. Lucian government that it should consider planting cash crops such as cabbage, watermelon and tomato that can all be harvested between one to three months.

The Taiwanese Ambassador explained that this approach taken after the passage Tomas, where local farmers were encouraged to plant cash crops. The condition then was that all seeds were to be planted before December 2010 and the farmers given a subvention.

It was rated a success, after initially catering for 600, but after 1, 400 expressed interest, only 800 were selected for that programme.

Now Chou believes a repeat of such a programme will be successful.

What impact could the second wave have on food security in Canada?

Be the first to comment on "Help for banana industry"

KIMANI ST JEAN SPEAKS WITH SPEAKER OF THE HOUSE OF ASSEMBLY