On September 18, 2017, the category-5 Hurricane Maria ravaged Dominica’s shores, damaging or destroying 90 percent of its buildings and causing damage equivalent to 200 percent of the small Caribbean island nation’s GDP.

In the aftermath, 20 percent of Dominica’s roughly 70,000 inhabitants had to flee due to lost homes or jobs, and 64 lost their lives.

Increasingly intense storms are just one of the ways climate change threatens small island developing states like Dominica, which are least responsible for producing greenhouse gases but face a disproportionate share of the consequences.

June marked the beginning of the 2020 Atlantic hurricane season, and scientists predict it will be more destructive than normal, with conditions in the Atlantic Basin similar to 2005. This year produced 27 named storms and 14 hurricanes.

Wealthier countries are shirking their responsibility to act quickly in the face of this threat, but small island developing states — representing a total population of 65 million people — cannot wait any longer for sustainable solutions to the climate crisis. That is why Dominica has embraced the goal of becoming the world’s first climate-resilient nation by 2030.

The United Nations’ 2016 World Economic and Social Survey explains, “Climate change resilience will demand that social, economic, and ecological systems become capable of reorganizing to maintain their essential functions. Also, their identity, and structure, while also maintaining their capacity for adaptation, learning, and transformation.”

JOURNEY TO THE THRONE 2017 – Zethra Baron

How To Save The World’s Oceans

Be the first to comment on "Hurricane Maria: Small island nations not waiting for rich countries to act" 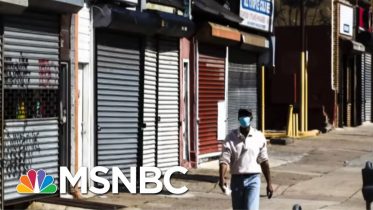 Pennsylvania Counties Battle Over Reopening Ahead Of Trump’s Visit | MSNBC

Counties in Pennsylvania are conflicted over the decision to reopen amid the coronavirus outbreak as President Trump plans a visit to the state. NBC's…