The one-day deliberation, a first of its kind, seeks to bring together some seven Northern Caribbean countries and territories—the Cayman Islands, the Bahamas, Cuba, the Dominican Republic, Haiti, Jamaica and Puerto Rico. National leaders, including heads of states, ministers and members of the private sector will discuss matters of mutual interest, focusing on: trade, immigration, regional security, education and climate change.

Speaking about the conference, Mr. Clark said that, “There are urgent and growing advantages to closer co-operation within the Northern Caribbean, and between those communities and North America; and this conference has the potential to begin to identify how this might be done.”

The former Prime Minister, currently President of Joe Clark & Associates Limited, is Vice-Chairman of the Global Leadership Foundation and a member of the Inter-American Dialogue. He is also a professor in the Institute for the Study of International Development at McGill University.

At a recent Jamaica-Cayman media briefing, Earl Jarrett, General Manager of JNBS, noted that, it was clear that the emerging geopolitical framework, developed nations have few strategic interests to defend in the Caribbean.

“Against that background, countries in the Northern Caribbean should seek to reassess our position and ‘cooperate’ in this new environment; hence, the need to hold a conference on economic cooperation,” Mr. Jarrett stated.

Speaking from Grand Cayman, Mr. Dunbar McFarlane, General Manager of the NBSC, said that, “To develop solutions which are effective in addressing our issues, we will have to rely on input from our neighbours. And, if we are realistic, we will need to lean on the resources and experience of those in the region who face similar challenges … shared challenges…to find shared solutions.”

Be the first to comment on "Joe Clark, former Canadian PM, to Chair Northern Caribbean Conference" 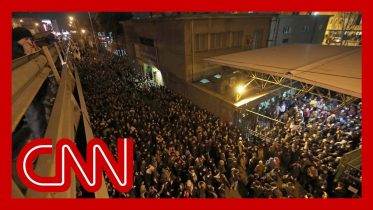 Thousands of demonstrators hit the streets condemning Iranian authorities for shooting a Ukrainian passenger plane and killing all 176 people on board. CNN's Nic…

The Whistleblower Complaint And The Cover Up: Who Is Complicit? – The Day That Was | MSNBC

Rep. Karen Bass: ‘How Many More Times Can Our Country Be Put Through This?’ | MTP Daily | MSNBC