'Loser': Dem Strategist Says Trump 'Has Nobody' To Console Him, Maybe A 'Hug From Lou Dobbs'

As Trump wreaks havoc in his final days in office, Democratic strategist Chaitanya Komanduri joins MSNBC’s Ari Melber to discuss his inability to concede and why he’s a “loser.” (This interview is from MSNBC’s “The Beat with Ari Melber, a news show covering politics, law and culture airing nightly at 6pm ET on MSNBC. ). Aired on 12/29/2020.
» Subscribe to MSNBC:

'Loser': Dem Strategist Says Trump 'Has Nobody' To Console Him, Maybe A 'Hug From Lou Dobbs'

64 Comments on "‘Loser’: Dem Strategist Says Trump ‘Has Nobody’ To Console Him, Maybe A ‘Hug From Lou Dobbs’" 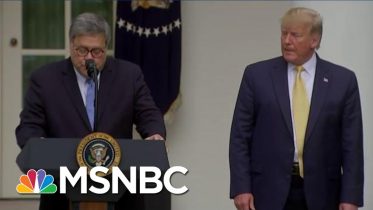 In an extraordinary move, a federal judge is condemning AG Bill Barr for “distorting” and “misleading” the public with his handling of the Mueller…