Measures to enhance ethics and accountability will have to feature prominently as part of the agenda of civil service and institutional environment reform in Dominica. In recent years, the debate on and efforts to curb ethical violations and enforce accountability have intensified in the Caribbean mainly due to the following reasons:

The lack of accountability, unethical behavior and corrupt practices have become so pervasive, and even institutionalized norms of behavior in the Caribbean, to the extent that one may conveniently speak of a crisis of ethics in Caribbean public services. Some may argue my suggestion of is extreme, nevertheless reality dictates otherwise, based on the regions ability in securing economic opportunities.

While one could single out a few countries, such as Barbados and St. Lucia, in which ‘tolerable’ levels of corruption exists, unfortunately the opposite is true in the majority of Caribbean countries. Aside from outright bribery and corruption, patronage, nepotism, embezzlement, influence peddling, use of one’s position for self-enrichment, bestowing of favors on relatives and friends, moonlighting, partiality, absenteeism, late coming to work, abuse of public property, leaking and/or abuse of government information and the like are common manifestation of this plight.

The obvious negative impact of such practices on productivity; the responsiveness, transparency of governments; the effective implementation of policies; and efforts to bring about recovery and development in general dictate that concerted action by all concerned must be taken upon to deal with this debilitating problem.

Dealing successfully with this phenomenon requires a deeper understanding of its underlying causes. The various authors who have attempted to give a plausible explanation for the problem have often singled out one dimension or another as being the most crucial factor. One maintains, however, that the matter is not that simple and that political, cultural and economic factors all lie at the root of this multidimensional problem.

Because recruitment in the civil service has been and is still very much influenced by patronage and political factors, the loyalties, commitment and actions of public officials are often guided and shaped by their primordial loyalties rather than the requirements of impartial professionalism. The integrity commission will have a field day addressing the principle underlying this enigma.

The sprawling nature of the state, its over- extended control over economic matters and the licensing and approval powers with which public officials are invested have created greater opportunities for the abuse of office for self-enrichment. Again, the Integrity Commission will have to address the principle underlying this enigma!

The issue whether the economic crisis is the cause or effect of the ethical crisis in the Caribbean is still hotly debated. Nevertheless, I am of the opinion that while the two crises are no doubt mutually reinforcing, the rapid deterioration of economic conditions experienced by most Caribbean countries since the 1980s, has further encouraged public office holders, both politicians and administrators, to seek and obtain rewards in exchange for their services and weakened their aversion and moral abhorrence to such practices.

Can the Situation be remedied?

Repeated attempts have been made over the years to combat corrupt practices and unethical violations. A common feature of those is the enactment of codes and establishment of institutional mechanisms to enforce ethical behaviour.

We need to take this further by creating an effect Act, a Special Penal Code chapter of which deals with consequence, under the title “Break of Trust and Offences Against the Interest of the Government and Public,” covered provisions governing, inter-alia, the receipt of ill-gotten gains, misuse or waste of public property, forgery of public documents, corrupt practices and acceptance of undue advantage. How about establishing an anti-corruption law and a “Clearance Certificate against Corruption if there are no current provisions in the existing wording of the Act?

Why have we not established, to date, (as mandated by our constitution) an Ombudsman? The need to establish a Public Complaints Committee to investigate complaints against public officials, and also a Public Accounts Committee to assist the legislature in overseeing the expenditure of public funds.

Similar bodies have been established in other Caribbean countries. How about a Working People’s Control Committee and the “Special Court” to try offences related to exploitations, waste, abuse of authority, corrupt practice and favoritism. How about a Commission for Enforcement of the Leadership Code and Permanent Commission of Enquiry, or is this all to fall under the portfolio of the Integrity Commission?

In most cases, these initiatives will be partially successful in achieving some of the immediate objectives behind these measures. However, this has not been generally the case in other developing countries. More crucial has been the fact that the incidence of ethical violation has increased even in countries where a large number of violators have been investigated and/or punished.

(This is what we are trying to monitor and avoid here).

The salient questions remain: why have these measures been generally unsuccessful in developing countries, and, given the extent of the malaise of unethical conduct and the hitherto limited success in dealing with it, is it realistic to expect that this situation can be remedied?

In the first instance, these measures have failed because they were introduced in an overall political and policy environment that was not sufficiently conducive to enable the success of the measures.

When grand corruption is rampant at the top level of government and politics, the nature of governance has basically remained undemocratic, unaccountable and patrimonial, and where patronage systems (Red Clinic – massive handouts) have remained intact, one can hardly expect to enforce measures against unethical behaviour with any degree of seriousness or that the enforcement systems and institutions will be left to function without interference. Thus, the nature of the state and governance and commitment at the highest political level are crucial prerequisites for any successful drive to curb and punish ethical violations.

Second, the measures that have been introduced have been partial in nature, focusing mainly on sanctions.

Third, many of the institutions that were established to promote ethics and accountability often lacked the resources, public visibility, impartiality and public support that are critical for their success.

The enormity of the task to deal with corrupt practices and to promote ethics and accountability in our public service is not to be underestimated. In spite of set-backs to be expected and experienced in this regard, it is still possible to score gains in a meaningful manner. Central to this is the need for the dedicated and sustained implementation of comprehensive, broad- based and self-reinforcing measures – and not merely partial solutions – by the government and the public to deal with the multi- dimensional nature of the problem, within the framework of democratic, responsive, transparent and accountable governance.

The Integrity Commission (appears not to have the natural law- teeth to intervene) has to ensure a comprehensive agenda to promote ethics and accountability in contemporary Dominican public services is clearly outlined, and it ought to comprise of the following:

This last element of the comprehensive agenda deserves further mention. Even the best of safeguards and practices under democratic systems of governance can give way to abuses — as the experience of developed countries has repeatedly demonstrated.

For this reason, a crucial safeguard of high standards of public ethics and accountability in Dominica has to fall on the ability of the citizens and people’s organizations and associations to hold public officials and politicians accountable for their acts and also to ensure that public institutions fulfill their functions properly and responsibly. The ongoing process of political institution reforms in Dominica should enhance such opportunities, if we adopt the principles of its necessity.

Finally, the international dimension to the ethical crisis ought not to be neglected. Bribery of public officials in developing countries has often been used by businessmen in developed countries as a fair and legitimate method for export promotion. Many governments in industrialized countries ignore the bribery, some openly promote it and a few even make it tax-deductible.

There is an urgent need to enforce ethical behaviour at the international level if grand corruption in developing countries – including Dominica – as a result of international business transactions is to be curtailed.

In recent years, Transparency International has been playing an appreciable role in raising the alarm about this problem and demanding that action be taken to remedy it. Any meaningful progress in this direction would require agreement on and the strict enforcement of international conventions punishing corruptors; strengthening international integrity systems; establishing disclosure of external accounts laws; and repatriation of wealth and payments amassed through international corruption. The international community is, however, far from any consensus that is likely to institute such measures.

Be the first to comment on "The need for Institutional change in our Governing Framework. (Part 1)" 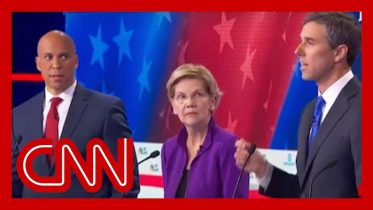 Booker reacts to photo of him giving O’Rourke ‘side eye’

Sen. Cory Booker reacts to a photo of himself giving fellow Democratic candidate Beto O'Rourke the side eye while O'Rourke spoke in Spanish during…

Chris Cuomo jokes with his governor brother: You’re single and ready to mingle