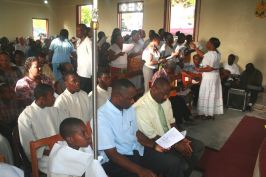 Roseau, Dominica – April 28, 2008……. The Head of the Roman Catholic Church in Dominica, His Lordship, Most Reverend Gabriel Malzaire has acknowledged the contribution of the Dominica government towards the construction of the new wing of the St. John’s Primary School in Portsmouth and the Saint Francis of Assisi Chapel in Capuchin.

On the occasion of the 80th anniversary of the establishment of the St. John’s School, better known as “Nun School”, a thanksgiving mass was held last Sunday.

The mass was attended by the Bishop of Roseau, Most Reverend Gabriel Malzaire, Parish Priest, Father Herman Sharplis, Principal of the School, Sister Claire Harris of the Sisters of St. Joseph of Cluny and six ICM Sisters.

Representing the Government of Dominica was Minister for Tourism and Parliamentary Representative for the Portsmouth constituency, Hon. Ian Douglas.

Part of the St. John’s School was badly damaged by the earthquake of November 21, 2004. The Government of Dominica stepped in and made a contribution of $500,000 ECD towards the rebuilding effort. The total cost of construction is estimated at just over $1 million ECD.

Following the thanksgiving mass on Sunday, Most Reverend Gabriel Malzaire blessed the new wing, which houses two classrooms, a library and a food lab/kitchen.

Later that Sunday, Prime Minister, Hon. Roosevelt Skerrit attended the rededication of the St. Francis of Assisi Chapel at Capuchin.

The one hour mass, which also included the blessing of the altar was attended by the Bishop and Parish Priest, Father Herman Sharplis.

The Government of Dominica made a contribution of $30,000 worth of building materials for the restoration of the chapel. A number of other individuals and groups within the parish and outside also contributed to the rebuilding effort.

Be the first to comment on "GOVERNMENT’S CONTRIBUTION RECOGNISED AS NEW WING OF ST. JOHN’S PRIMARY SCHOOL IN PORTSMOUTH IS OPENE"

A Canadian has been arrested for allegedly sending U.S. President Trump a poisoned letter

A Canadian woman has been arrested for allegedly putting poison in a letter addressed to President Trump. Annie Bergeron-Oliver reports. #cdnpoli #uspoli Subscribe to…

Cuomo On COVID-19: ‘This Is Still A Developing Situation And We Don’t Know All The Facts’ | MSNBC